The sun is burning; it is hot, humid and incredibly dusty. We reach the first destination for our malaria field studies via a bumpy and due to strong rains partially flooded road: The small village Phak Kha in Southern Laos.

With its 6.8 million residents, almost a quarter of which lives on the breadline, Laos is one of the poorest countries of the world. A fourth world country. Laos was shaken after the Vietnam War. Today there are still many unexploded land mines strewn around the country, which cause accidents with casualties and fatalities each year.(1)

Health care is difficult. Many villages are hard to reach in dry season and impossible to reach in rainy season. But these are just two out of many reasons, why malaria is so hard to eradicate in Laos. The treatment of malaria, which is caused by the parasite Plasmodium, gets harder due to drug resistances. Most drug-resistant Plasmodium strains first arise in the Mekong region. Why? Well, scientists all over the world speculate about this….(2)

Many malaria patients in Laos have a lower amount of parasites in their body as for example malaria patients in Africa. Often they don’t even show classical malaria symptoms such as intermitted fevers. These patients are known as asymptomatic carriers. However, they contribute to spreading the disease, when an Anopheles mosquito bites them, as this mosquito transmits the parasite from one human host to another. Therefore, we aim to diagnose asymptomatic carriers in our study. However, this is even harder with these small amounts of parasites.(2) 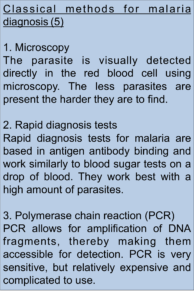 The Centre for Biospectroscopy at the Monash University, which is codirected by A/Prof Bayden Wood and Dr Phil Heraud and to which I belong since November 2016 showed previously that they can discriminate between malaria infected and uninfected human red blood cells by their interaction with infrared light.(3) Therefore, I equipped myself with a portable infrared spectrometer for my mission in Laos. 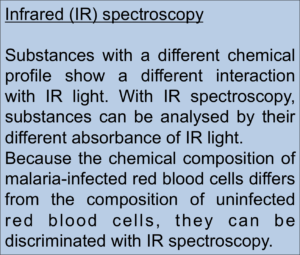 I travelled to Laos on behalf of the Centre for Biospectroscopy in order to find out if this method works on real malaria patients in a fieldsetting. The lab results put me in a positive mood! Bur believe it or not, even we scientists know that there’s a whole world out there. And findings cannot be directly transferred from the lab to the real world…

Together with a team of Laotian and one Japanese scientist, my partner Roman and I hit the road to six different remote villages in Laos. Soon after we arrived in the villages, the residents came to our station to be tested for malaria. All participants were informed very well about our study. We tested blood samples of 600 patients taken from a pinprick by microscopy, with a rapid diagnosis test, with polymerase chain reaction and with infrared spectroscopy. The working conditions were rough – instead of a temperature controlled well equipped lab, I found myself sitting on the flor in front of a school or a temple. Sometimes there were sockets, electricity less often.

The poverty is immense, many children do not own shoes, but the warmth, curiosity and creativity is heart-warming. How many games could children in richer countries think off with only one piece of string?

We tested 100 persons per day for malaria. Thereafter a nice meal was prepared for us in the villages. Luckily the heads of the villages were not offended but thought it was hilarious that we Europeans were a bit careful with the food…

After nine days of hart work, little food and no shower, we went back to Laos’ capital Vientiane. Now it is time for me to analyse my data and to answer the question: Can we detect asymptomatic carriers of malaria with infrared spectroscopy?

For deeper insights into this expedition watch this short movie:

Equipped with an ATR-FTIR spectrometer, a team of scientists – including our own Anja Ruether – hit the road to remote villages in Laos to find out if this technique can be used to detect asymptomatic carriers of malaria. Join our expedition now and watch this movie produced by Roman Schoeni! 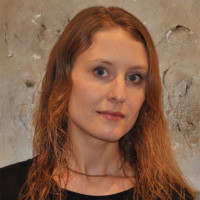