What’s in a scientist’s mind? the HLF Questionnaire – Part 3

Martin Hairer is a mathematician specialized in probability. He started his training in physics, but soon realized that physics can be a bit ‘dirty’. That is, making assumptions in physics can be messy, while mathematics felt like safe ground. “You can make mistakes in the proofs, but there are no endless arguments. At the end of the day, everybody agrees on what is right” . Martin went on to specialize in probability, which, funny enough, deals with uncertainty.  At the end of his PhD, he wasn’t sure about staying in research, because he didn’t like the uncertainty of the academic career. Programming and engineering were his backup plan. Still, he decided to give it a try.

Martin was awarded the Fields Medal in 2014, one of the biggest achievements in mathematics, for his groundbreaking work on stochastic partial differential equations. As a laureate, he tries to participate regularly in the HLF, whenever his tight schedule allows. Between chats with enthusiastic young researchers, discussions with other laureates and press conferences, he took the time to sit and talk about the big questions in life (i.e. our questionnaire), and to give his opinion on the most pressing matters for young people.

In his opinion, to do good research one should keep an open mind and not focus on solely one area. Even if learning about other subjects doesn’t lead to writing an article, one should avoid the trap of only reading a paper that is immediately useful to one’s current project. But in order to have the peace of mind to do this, one needs funding, and Martin is aware of how the current funding system doesn’t help. In his opinion, nowadays you either get a lot or you get nothing, and that’s a problem: a “rich gets richer scheme”, opposite to a “small funding scheme”, where many more could benefit from it. For Martin, it’s not completely clear how to change this, considering that the people who decide how to distribute money need to justify their budgets in front of governments, and the easiest thing is to go for big shiny projects instead of small funding scheme. The scientific community is listening to Martin Hairer, perhaps it’s time we asked the policy makers to pay attention too. 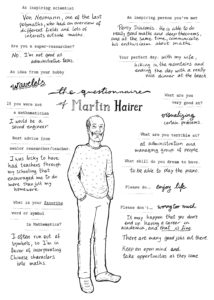