Meet Johanna Pirker, one of our featured young researchers in a series about some of the women attending this year’s Heidelberg Laureate Forum in September 2016. 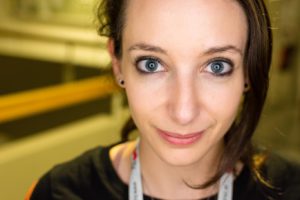 Johanna is a PhD student who is both from and currently based in Graz, Austria. She has a Masters of Science in Computer Science, and will soon be finished her doctoral work. She is also a university assistant at Graz University of Technology at the Institute of Information Systems and Computer Media, where she researches and lectures in fields such as game development, information retrieval, and social network analysis.

Johanna is a researcher who is always looking for connections. Although her main research interests lie in HCI, VR, and games research, she sees many interesting connections with other fields like AI, data and networking analysis, e-learning, and computer science education.

I see a lot of potential in games research for interdisciplinary research and also investigating some “highlights” of computer science such as AI strategies, VR technologies, or big data analysis. I mainly specialized in games and environments that engage users in a meaningful context such as learning, training, and working together through interactive and motivating tasks. I am interested in all different phases of this: design, development, and analysis.

Johanna’s Masters research was completed during a visit to MIT’s Center for Educational Computing Initiatives. There, she worked on the “integration of simulations and animations of electromagnetic fields into collaborative virtual world environments.” Now, she’s wrapping up her doctoral work, which is a follow-up to the Masters project.

I work on interactive environments, where I try to investigate the motivational and educational aspects of integrating physics simulations in different interactive environments, such as various virtual reality experiences, game-based environments, or virtual worlds. The latest contribution is a virtual reality representation of a physics laboratory with different interactive experiments. I hope to have an impact with my thesis to improve STEM education and make learning STEM fields such as computer science or physics more interesting, engaging, and easier to understand.

I’m personally quite invested in the computer science education field, and am always thrilled to see research like this. After speaking with Fred Brooks about virtual environments, it feels like so much more is possible with VR today than I previously realized. (Granted, it seems unlikely much VR will end up in K-12 classrooms anytime soon, but that doesn’t mean it can’t make an impact in informal education settings like museums.)

One of the challenges that Johanna faced after finishing her Masters is the issue of being interested in too much (I’m sure many young researchers can relate). In her case, the solution was to find the common thread in all those interests.

I was working in so many different fields and wanted to do research in all of them. But in the end, I found that there was one element which combined all the fields I was interested in: the human factor. Putting the human factor in the spotlight of my research, and learning from the interaction with the environments I created helped me a lot to find the purpose of my research.

Johanna’s excitement for HLF is quite inspiring, as she shows in her discussion of science heroes:

Computer science and research and different areas of computer science have always been most important and inspiring to me. So many individuals became my “science heroes.” I’ve put a lot of effort in my scientific career and was able to receive awards, get different scholarships, and publish several publications. However, this was only possible because I had the possibility to look up at high-level work of our scientific leaders and pioneers in this field.

She hopes to be able to mentor and be mentored by others at the conference, in particular to identify which elements of her research would be of interest to the greater scientific community.

Congratulations on your accomplishments, Johanna, and we hope you are enjoying your week!

Stay tuned for a special post about the advice our featured women want to share with others.

Gail is Manager of External Education Programs at Shopify where her team works to make learning computer science better for everyone. Previously, she taught computer science at Carleton University. Gail was a co-founder of Carleton's Women in Science and Engineering group (CU-WISE), and has lead many computer science outreach events. You can follow Gail on Twitter (@gailcarmichael) and her personal blog (The Female Perspective of Computer Science).