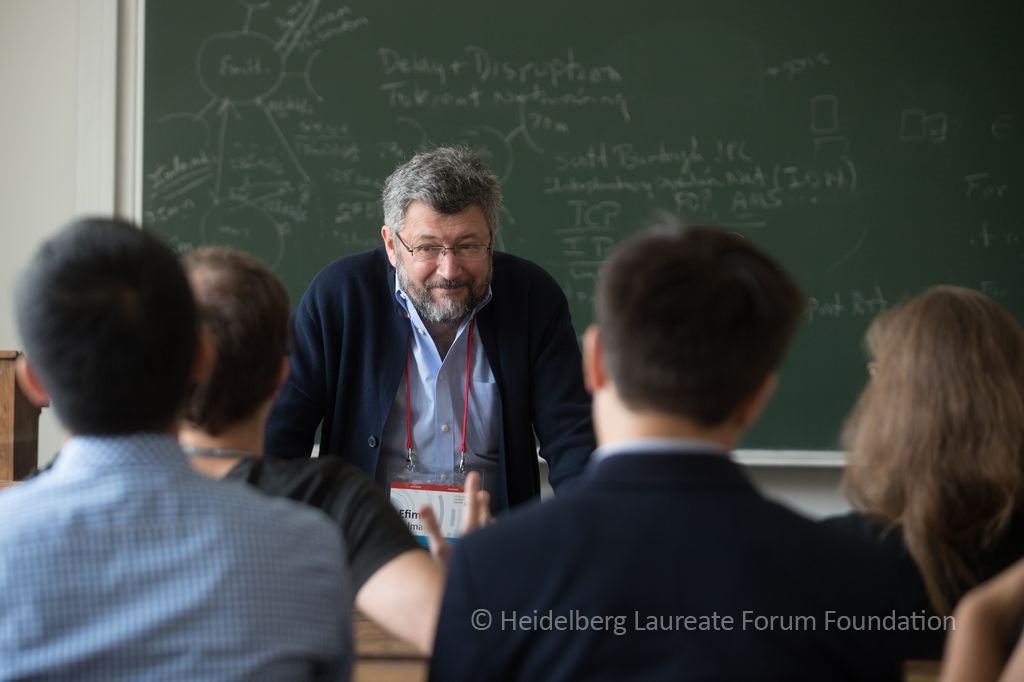 At the start of his HLF lecture on Asymptotic Group Theory on Thursday morning, Fields medalist Efim Zelmanov described the ‘group’ as: “the great unifying concept in mathematics,” remarking “if you go for a trip, and you are allowed to take only two or three mathematical concepts with you, give serious consideration to this one.” Very loosely defined, a group is a set of things (its ‘elements’) that you can ‘multiply’ together, with this multiplication behaving in certain helpful ways. Think of numbers being added, functions composed together or rotations and reflections of a shape being carried out one after the other. I doubt any mathematician would accuse Zelmanov of overstating their importance in mathematics.

In his talk he discussed residually finite groups. These are groups which are infinite in size but still just a little bit finite-y. In technical terms, the group has a set of homomorphisms with finite kernels having trivial intersection. Although the group is too large to see all at once, as Zelmanov put it, we have “photos from all sides of the group”. He contrasted this to “hopelessly infinite groups”, for which no such photo album is possible.

Zelmanov considered under what circumstances finitely generated groups can be proved to be finite. One immediate way this won’t happen is if one of the generators is not periodic: if you keep multiplying it by itself you keep getting new elements forever, never ‘looping back’ to the original generator. (Imagine starting with 1 and continually adding 1…) The Burnside problem asks whether there are any other ways to make a finitely-generated, yet infinite, group. In 1991, Zelmanov proved that for residually finite groups, there aren’t. However, this isn’t the case for the ‘hopelessly infinite’ groups.

In his lecture Zelmanov, accompanied by his excellent hand-drawn slides, discussed this before moving on to related topics such as the growth of groups (if you start with a generating set, and create new elements by multiplying them together, how quickly does the set grow?) and ‘approximate groups’ (which, as the name suggests, are things that are like, but not quite, groups).