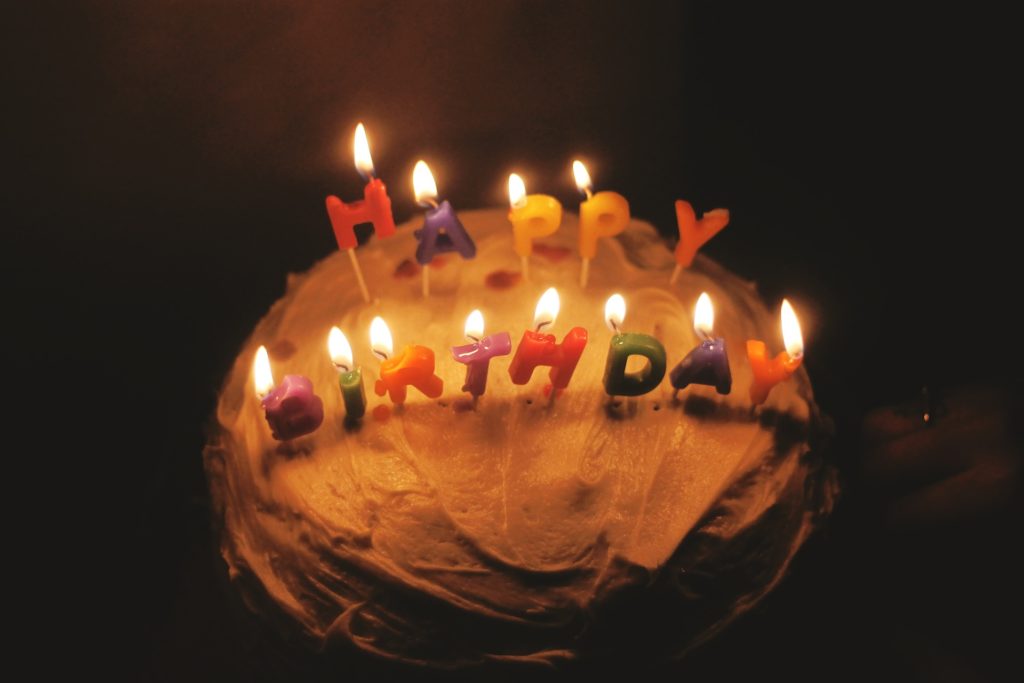 Last week I was performing at the Cheltenham Science Festival in the UK, where I co-presented a new family show about probability and games. One of the games we played was, “How many people do we need to ask ‘when is your birthday?’ (working backwards from the front of the audience) until we find two people with the same birthday?”

This is a problem you can analyse mathematically, making some sensible assumptions. First, you can simplify messy reality by assuming that there are exactly 365 days in a year (rather than the slightly less helpful but more realistic 365.2425) – meaning, we ignore the concept of leap years. This is mildly unfair on people who were born on the 29th of February, but their chances of winning our game are much lower anyway, so they’ve probably already given up.

The second simplification we can make is that everyone’s birthday has an equal or roughly equal probability of being on any one day of the year. This seems to be broadly a sensible assumption – but in reality there are some practicalities which can skew this distribution.

For instance, many hospitals have more facilities open during the week than at the weekend, including those for induced or Caesarian births, meaning on average more birthdays tend to be on a weekday than at a weekend – but this will average out across years, as the weekdays fall on different days. It’s also known that statistically the most common time of year for birthdays is around September, falling roughly nine months after the dark, stay-indoors winter period when people presumably… umm… stay indoors more.

But everyone is subject to the same probability distribution, and factoring it in would make a much more complicated model, and not much difference to the results. So let’s assume the probability is equal across the year, to simplify our calculations. This means everyone has a 1/365 chance of their birthday being on any particular day, and for any given person you might meet, there’s a 1/365 chance they have the same birthday as you.

What’s interesting about the problem as applied to our game is, the chances of a birthday coincidence happening, and happening before we get very far through the room are much higher than many people expect them to be. It’s become a well-known ‘surprising fact’ among mathematicians, that the number of people you need before your chances of a birthday coincidence go above 50% is a mere 23 people.

When asked to guess how many people they thought we’d need, many in the audience picked numbers over 50, and in some cases over 100. But 23 people is actually enough for a coincidence to become more likely than not.

This can be continued to obtain the probabilities for each number of people; these can then be converted to percentages and subtracted from 100% to get the probability of there being a coincidence.

If you look down this table, you’ll find that the probability tips over 50% at just over 23 people, and for 30 people it’s a little over 70%. This is impressively high, and for many it’s hard to believe – for 60 people in a room, the probability is around 99.6%, and you can probably do quite well making bets with people that there are two people with the same birthday in rooms of 30-40 people, where your chances are actually pretty high.

Why is this so surprising?

One of the main reasons why this probability surprises people is that they’re asking themselves the wrong question. When you ask them to predict the chances of a birthday coincidence in a room, some part of them imagines themselves going into a room and finding someone with the same birthday. But this is quite an unlikely event – you’re looking for people with a particular birthday, which is 1/365 × the number of people in the room. This means you’d need 365/2 = 182.5 people or more for this to be more likely than not.

But in the question we’re actually asking, the difference is subtle. I want to know the chances of any two people in the room having the same birthday – and I don’t care what birthday it is. So every pair of people in the room is a possible hit – and the number of possible pairs in a room of people grows much more rapidly than the number of people. For three people, there are 3 pairs, but for 4 people there are 6, and for 5 people there are 10 possible pairs.

With 23 people in the room there are (23×22)/2 pairs, because there are 23 choices for the first person, and 22 for the second, but this counts each pair twice as they could occur either way round. This gives 253 possible pairs of people, and with some wiggle room to take into account the coincidences involving more than two people, this is enough to put the overall chance of any kind of coincidence as over half.

In fact, as eagle-eyed maths/football fan Mitchell Stirling pointed out on Twitter earlier this month, following the announcement of the World Cup 2018 squads: of the 32 different 23-player squads put forward by the countries of the world, 15 of them contain a birthday coincidence. Impressively close to 50%!

In our audience at Cheltenham, however, something even more impressive happened. When we reached around half-way along the second row, a child stated his birthday – 12th February – and a woman seated next to him – who turned out to be his mother – also gave her birthday as 12th February! This was sufficient to win our prize, which was a bar of chocolate each.

But then, as if this coincidence wasn’t impressive enough, the pair informed me that the father, who wasn’t there on the day, also has the same birthday! This means a mother and father, and their son, all share a birthday. What are the chances? (That’s a dangerous question to ask a mathematician, because they will just tell you the answer).

For three randomly selected people, the chances of them all having the same birthday are (1/365×1/365) = 1/133,225. The first person’s birthday, whatever it might be, has a 1/365 chance of being shared by each subsequent person, and we multiply these together as they’re independent events.

This is why in news stories about families who share these kinds of remarkable coincidences, huge probabilities are often stated – and these kinds of stories are pretty easy to find, as they make enjoyable news and happen relatively often.

Eastbourne baby born on same date as his two siblings, BBC News, October 2010
Three generations of Canada men share same birthday, BBC News, September 2017
Family have four children with same birthday at odds of more than 133,000 to one, The Telegraph, January 2014
(In this case, two of the four children are twins, so this is the same calculation as for our game-winning family.)
Three generations of Littleton family boys all born on July 1; family celebrates rare coincidence, from ABC Denver 7, July 2017
Here the probability is given as ‘a one in a 33,000 chance’, presumably having misinterpreted the number as 1/33,000 and not one in 133,000.

Some coincidences turn out to be even more impressive:
Can your family beat this incredible birth coincidence?, KidSpot, August 2016
Here a father, two sons and a granddaughter all share the same birthday – despite the odds being one in 48,627,125, nobody thought to mention this in the article.

There’s actually a 1/365 chance of this happening, if you already have one set of twins, so it’s not really anything to get excited about. The impressive thing here is having two pairs of identical twins in the same family – the chances are around 1/4,489, given that one in every 67 pregnancies on average results in a multiple birth.

In fact, even for the impressive 1-in-133,225, and 1-in-48,627,125 chances of three and four identical birthdates in a family, I’m not really that fussed. In much the same way that a birthday coincidence is much more likely to happen if you don’t care about which actual birthday it is, if you have millions of families around the world having babies, things that happen one time in 133,000 will happen fairly often – and even things that happen one time in 48 million will still happen every once in a while.

It’s also worth considering that our family with mum, dad and child all sharing a birthday might not be as unlikely as you think – depending on how they originally met. I started my probability show with the revelation that my old friend Jimi, who I went to university with, and first met while out in a pub, has the same birthday as me. I also share a birthday with another of my friends from uni, who I briefly dated.

My theory goes as follows: It’s not insignificant that if you have the same birthday as someone, there’s an increased chance you’ll be going out for a drink around the same time, and if you are the kind of person who meets your future spouse in a bar, you’re therefore slightly more likely to marry someone who has the same birthday as you. I imagine this effect is only small – but we’re not necessarily talking about independent probabilities before.

So maybe we want to stick to people whose inclusion, or not, in a family group isn’t influenced by their birthday, because they’re born into it. I looked up the Guinness World Record for most siblings born on the same day, and it turns out it’s five – the Cummins family in the USA has five children all born on 20th February. This happens with probability 1 in 17,748,900,625 (the Guinness website states it as one in 17,797,577,730, presumably because they’ve remembered about leap years and have a more sophisticated model).

Given that 17 billion is more than double the population of the world, and many times the number of families, this is genuinely something that’s actually quite unlikely, and deserving of a prize like an official World Record. I hope they got more than a bar of chocolate each!