What’s in a scientist’s mind? the HLF Questionnaire – Part 2

Larwan Berke is a PhD student in Computer Science, and participated in the 5th Heidelberg Laureate Forum. His research focuses on developing software to assist people who are Deaf or Hard of Hearing (DHH), so that they might join activities with hearing people.

From an early age, Larwan was interested in maths and space. While other fields of knowledge appeared too abstract to grasp, maths offered him a clear and unambiguous structure. The taste for logics naturally led him to Computer Science. An internship with Prof. Rosalee Wolfe at DePaul University was crucial in his career path. Prof. Wolfe runs a project to improve the accessibility of the DHH community, the ASL Project. It is therefore no coincidence that the first deaf woman to get a PhD in Computer Science, Karen Alkoby, was a member of Prof. Wolfe’s group.  While at DePaul university, Larwan met Dr. Matt Huenerfauth, also part of the ASL Project. Huenerfauth encouraged him to pursue a PhD in Computer Science, under the joint supervision of Wolfe, Huenerfauth and Prof. Vicki Hanson (president of the American Machine Computing Association), whose research interests involve accessibility issues in communities with disabilities, and in particular, has worked on American Sign Language. 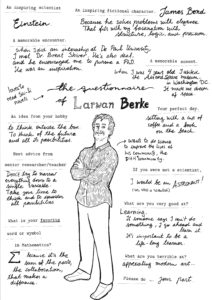 *DDH: Deaf and Hard of Hearing.

Larwan is hard to miss in a crowd, given his stature and his curly hair, but during the 5th HLF week, he attracted the other participant’s attention also for being the first deaf participant at the HLF, and for having the best team of interpreters around him. Without a professional mathematics background, with the help of Larwan, they were able to translate in real-time complex notions of computer science and maths into American Sign Language, as it can be seen here. Personally, I believe that for this fact alone, these 4 remarkable people deserve our deepest admiration.