Here I post a translation of what I wrote about the HLF in my weekly column ‘Professor Pi’, in the largest newspaper in Belgium, ‘Het Laatste Nieuws’. My short column addresses a broad audience but has to include one formula each time; quite a challenge and this is why I took Fermat’s theorem. I thank Gina Smith for editing the English translation. 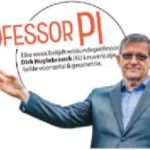 I spent the last week at the 5th Heidelberg Laureate Forum (HLF 2017) in Germany. This annual meeting brings together the top minds in mathematics and computer science with young researchers around the world who are working in those fields.

The week-long fete features ritzy banquets, a gorgeous river boat cruise on the Necker, a castle and a science museum visit. The scientists show up in the ritziest of black Mercedes cars to spend the week dialoging with young researchers and exchanging information about cutting edge theories and developments in theoretical and applied math, robotics, AI and quantum computing.

The late billionaire physicist Klaus Tschira (1940 – 2015) initiated the event in 2013, with the support of the Heidelberg Institute for Theoretical Studies (HITS). He envisioned a conference that would bring together winners of awards as the Abel Prize, which is, since 2003, the equivalent of the Nobel Prize in math, and its equivalent in computing, the Turing Award. The show now also invites winners of the Fields Medal (for best mathematician under 40), the Nevanlinna Prize and the ACM Prize in Computing.

This year as in other years, the scientists presented their findings to the some 200 chosen youngsters who were invited at the event. The undergraduates, graduates and post-doc researchers who are invited here get to present their research in a series of workshops and poster sessions, too. Jonas Deré (KU Leuven), a mathematician from Kortrijk (Belgium), was one of those youngsters. He told me he couldn’t wait to meet such famous mathematicians. There were plenty, such as Russian Efim Zelmanov or Austrian Martin Hairer, but it is too bad Deré wasn’t here last year. Andrew Wiles, who proved the 400-year-old Poincare conjecture of Fermat, was in attendance then. As a reminder, it features the following equation, which has no positive non-zero integer solution for n greater than two:

Some invited journalists were here, too, which put the finishing touch of this high society party of math and computer science. I was one of them. But dear reader, don’t be jealous. This is hard work! How do you start an interview with someone who studies “motivic cohomology” for example?

Fortunately for me, the celebratory mood at the banquets and other HLF events can encourage people to make some fun and unexpected statements. At one point in last year’s gathering, I casually asked the German mathematician and Fields Medal winner Gerd Faltings why Belgian mathematicians seem to outnumber German winners of that honor. His answer surprised and delighted me: “It’s because Belgians do not take themselves too seriously.”