I noticed the blog about the lack of a Noble Prize in mathematics, and so I here post a translation of what I wrote about this question in my weekly column “Professor Pi’, in the Flemish newspaper “Het Laatste Nieuws” (1800K readers). The short column addresses a broad audience but does include a formula in each column; quite a challenge. 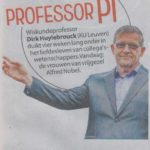 There is no Nobel Prize in mathematics, because Alfred Nobel’s wife left him for a mathematician and Nobel was revengeful, is the common story. It’s a fable: Nobel (Sweden, 1833 – Italy, 1896) was a bachelor. Moreover, in none of the love affairs he had there was any link to mathematician. Nobel had asked the Russian Alexandra for marriage, but she rejected him. Then he fell for his secretary, Bertha Kinsky, who left him to marry a certain Baron von Suttner. With his third ‘love of his life’, Sophie Hess, he had a relationship that lasted for more than fifteen years. They did not marry, even though Nobel referred to his 23 years younger girlfriend as “Mrs. Sofie Nobel.”

And so, some adapted the story and argue, equally unjustified, that Nobel had a disrespect for mathematics because of a rivalry with a Swedish mathematician, whom he would never want to attribute his Nobel Prize to. Some ‘name dropping’ adds a shine of truth to the story: that rival would have been the Swedish mathematician Gosta Mittag-Leffler. He was indeed a leading mathematician from Nobel’s time, and his theories gave rise, for example, to formulas such as those for the inverse of the sinus, “sin(z)” (the quotient of the side opposite to an angle in a right triangle divided by the hypotenuse), here in an ‘general version for complex numbers’:

That formula indeed seems worthy of a Nobel Prize, but Alfred simply did not think of mathematics in his will. Note there is no Nobel Prize in philosophy either. Rivals he had, the inventor of dynamite, because his explosive contribution to humanity earned him the nickname of ‘merchant of death’. And so he wanted to clear his name by awarding good, tangible contributions to humanity.

It is true though that women played a role in Nobel’s will. He created the Nobel Peace Prize, and, coincidence or not, his former lover Bertha Kinsky got it. Hess was his girlfriend until she got pregnant from another man. She then wrote an “impressive” begging letter:

Dear Alfred,
It is very bitter to have to talk of money, because I am being treated like a common whore, especially by that common, nasty Jew who is known all over Vienna and whom you would find an arrogant and vulgar dog, if I judge you correctly, so I have to tell you that I am quite determined to marry and if you want to pension me off, dear Alfred, I beg you to give me 200,000 florins, then you have the assurance that I and my child are looked after and can make ends meet, you can invest the money with a bank, so that I get only the interest, it would in any case only be 8000 florins […] Nor do I think it was your intention to have me treated like a whore. I cried so much, and God will avenge me, believe you me! What I have suffered over the last three weeks is indescribable! Yes, I have done wrong, but even so I’m not the worst or a vulgar woman, no one can say that who knows me, but to surrender me to that vulgar Jew that’s a sin, I didn’t deserve that, I have wasted my whole youth […]. No one wants a wife who has been the mistress of another and lived with him for so long, believe you me. That is why you must be reasonable and not so hard on me.

Sofie got her money from Nobel. The mathematicians got nothing.