To make all the HLF attendees’ lives easier this week, the organisers have put together a marvelous app which includes the programme for the event, information about the conference, a full delegate list with a built-in messaging system, and a few other bells and whistles. There’s also an intriguing mystery, which has been eating away at me since I installed the app at the start of the conference.

In the app, there’s a built-in ‘selfie’ function, to allow delegates to take official HLF selfies (or #seHLFies, if you will). The app comes with three options for a selfie overlay – the conference ‘swoop’ shape, the logo in the corner with the event date below, and a third one, wherein lies the mystery. Here are some sample selfies of myself and Paul (also from the blogging team), to give you the idea: 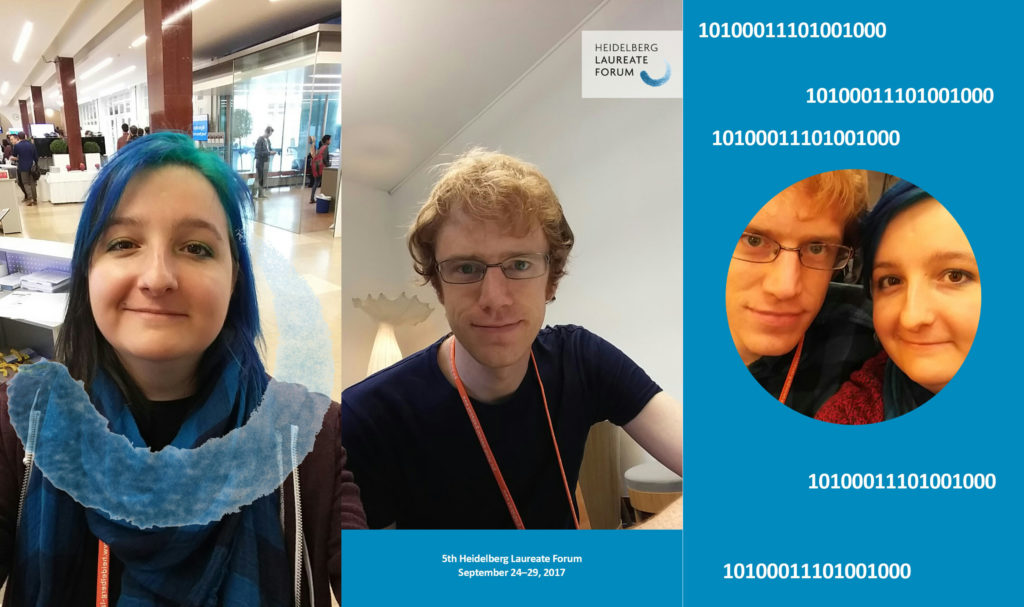 This third selfie frame comprises a circular hole for your mathematical face, with a background matching the HLF colour scheme, and is decorated with some intriguing ones and zeroes. They spell out the same number five times down the screen, which is:

On spotting these hidden figures, buried in an obscure function of the app, my thought was that maybe the organisers asked the app developers to include a mathematical numerical Easter Egg, for delegates to find and puzzle out. Exciting!

Maybe this is a binary number that converts to an interesting value in decimal? Maybe it can be split into smaller chunks of binary and translated into letters to spell a secret message? Or maybe it’s just some random digits they put there to make it look computery. Well, the only way to find out was to try to translate the number, and like many of the best parts of HLF, this took place in the pub.

Our first approach was to convert the number from binary to decimal.

In our old friend base 10, the number is 83784. This isn’t a particularly interesting number – it certainly doesn’t have its own Wikipedia entry – and it’s not even prime. It’s the classification number of a very boring minor planet about three astronomical units away from the sun. It’s not a valid US ZIP code, but it’s the postal code of a town in the far north-west of Mexico. There’s literally nothing particularly striking about it.

So maybe we need to split the number into smaller chunks? Well, there’s a problem there too – it’s a frustratingly prime 17 digits long. Even if you ignore the last digit or two, and split it into sections of four or five digits, you don’t get anything interesting. 10, 3, 10, 4 is what you get from four-digit numbers, which converts to letters as JCJD. If you split it into 5-digit chunks and ignore the last two, you get 20, 14, 18, which spells TNR. None of this seems to mean much at all.

Barring actually asking the organisers, this leads me to one of two inevitable sad conclusions: 1, that I’ve missed something obvious and failed to decode this, or 2, that my third possibility above is true, and it’s genuinely just a random number put in to make things look mathsy (an instance of the phenomenon I refer to as cumulonumbers, and collect egregious examples of on a Pinterest board).

In the case that it’s option 1, please continue applying your own mathematical reasoning/decoding/deduction skills to the problem. In the sad but likely case of 2, here’s some suggestions I’ve come up with for what the organisers could have used instead (using some Laureate seHLFies for illustrative purposes). 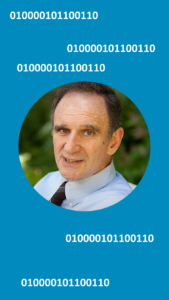 Cryptography expert and ACM A.M Turing award winner Martin Hellman is modelling the number 010000110000110, which, when split into three chunks of five digits converts to 8, 12, 6 – the letters H L F. What better to represent the Heidelberg Laureate forum? 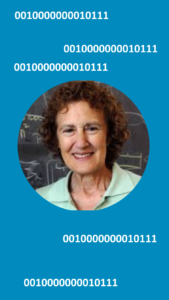 Next up, Turing laureate and computer scientist Barbara Liskov displaying 0010000000010111, which split into four-digit chunks spells out 2017 – this app only covers the 2017 event, so next year’s app could update with 2018. It’s unfortunate that a 0 and 1 in the middle leads to a large string of zeroes in this number, which is slightly aesthetically unsatisfying (what a 21st-century problem). 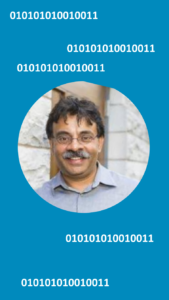 And finally, Nevanlinna Prize winner Madhu Sudan is wearing a lovely number (literally) – 010101010010011, which in sets of 5 spells out 10, 20, 19, or KTS – to represent the Klaus Tschira Stiftung, the founding organisation of the HLF, and a keen promoter of maths and computer science. Wear it with pride!

Have you taken any selfies using the HLF app yet? If you were hiding a secret binary message in the app, what would you include?