During the 7th Heidelberg Laureate Forum 2019, a group of young researchers met to start an intercultural science-art project. The participants created artworks inspired by their own research to create more natural ways for society to understand the work made by young scientists. Here you can find a detailed description of the project and the thoughts and conclusions and here all submitted works with descriptions by the artists. Since then, more young researchers have joined the project. In this article, we share these new scientific artworks. We start with a video created for the science communication event XXII Festival de Matemática of the Argentine Mathematics Union.

Now to the artists and their work! 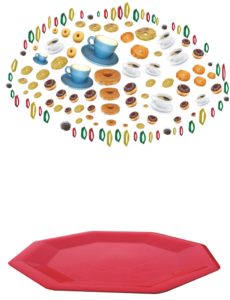 Let Pn be a simple polytope with m facets F1,… , Fm. By Definition of quasitoric manifold (Buchstaber & Panov, 2015) it follows that every point in π-1(rel.int(Fi)) has the same isotropy group which is a one-dimensional subgroup of (S1)n=T1. We denote it by T(Fi). Therefore, for a point p in rel.int(Fi) we have that  is homeomorphic to a torus Tn-1. Similarly, for a point q lying in the interior of some k faces we have that π-1(q) is homeomorphic to a torus Tn-k and the fixed points of Tn action on quasitoric manifold M2n correspond to the vertices of Pn. 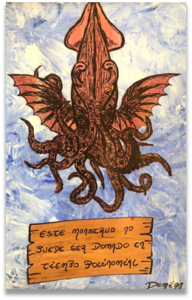 The P vs. NP conjecture in complexity theory (Cook, 1971) is one of the most prominent open problems in mathematics and computer science. There are many reasons for this. It is reasonably easy to get an intuitive idea of what it states, it has many deep implications to everyday life in both, science and society, and last but not least, it was included by the Clay Mathematics Institute in the selected group of Millenium problems.

An artistic approach to this problem should faithfully visualize what it represents to the mathematical community. What we feel when we think about it and what a solution to the conjecture would mean. If the known mathematics is a map, then conjectures like this one represent the limits of the known world. Something human mankind wishes to know and understand better. We ignore what can be found behind these areas and the mere idea of facing them seems to be a perilous and foolish endeavor. The first world maps labeled unexplored territories with the inscription Hic sunt dracones – Here be dragons, together with the depiction of sea monsters and mythological creatures. Now, what is an open conjecture if not a mysterious, untamed monster waiting to be conquered? We might think that we understand it, but truth is that only the most skilled adventurers may have a serious chance against this beast, and the glory that comes with a definitive answer to the P vs. NP issue is comparable to the glory of overcoming a beast in tall tales.

In classical medieval style, my monster is a mix of different real-world animals. This can frequently be observed in tapestry all around Europe, where the artist creating the tapestry depicted strange and exotic landscapes without ever visiting them. Basing their art on descriptions of explorers, strange creatures emerged from this interaction. The inscription in Spanish, ‘This monster cannot be tamed in polynomial time’. Here more thoughts about this work.

In his 1929 surrealist painting, The Treachery of Images, René Magritte declares Ceci n’est pas une pipe (This is not a pipe). In so doing, he highlights this is but an image, a representation, of a pipe, not truly a pipe itself. I recently wrote a song (Gray, 2019) with lots of references to R and the tidyverse:: metapackage (Wickham,. 2017). Here, I will unpack the pipe operator, %>%, that features throughout the lyrics (Figure 5). The %>% pipe operator is the first major concept introduced in Wickham & Grolemund (2016).

What is an operator? We often forget that operators are, themselves, functions. For example, + is a function that takes two arguments, numbers, and returns a single number. Algebraically, 3+2=5 is shorthand for +(3,2)=5. For those with formal mathematical training, multiple uses of the %>% operator in a single line of code can be thought of in terms of a coding instantiation of a composite of functions. What is a composite? Let f and g be real functions. The composite of f with g is the real function g•f given by the formula (g•f )(x):=g(f(x). For reasons that only made sense to me once I reached graduate-level mathematics, we read a composite of functions from right to left. And just to break our brains a little, algebraically, the composite operator is a function, so we have g•f =•(f,g)! The pipe, %>%, operator is the R-language equivalent to the composite ∘ operator on real functions.

Why do I love to %>%? Here is an example with three functions: .

# generate sample from normal distribution with

# calculate mean of that sample

The reader is invited to consider if they agree with the author that it is harder to read the symbols so close together, in this  instantiation of the code. Also, arguably more importantly, one does not have the ability to comment each component of the algorithm. There is a downside to the %>%, however. The longer a composite becomes, the more difficult it is to identify errors. 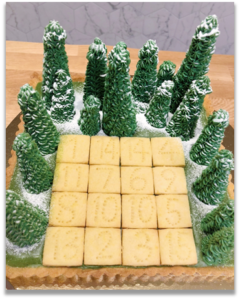 This is a matcha (抹茶, Japanese green tea) chocolate pie, decorated with ‘forest-like’ matcha cream. The person who requested me to make this pie, would like to have a ‘magic square’ on it. One of the first magic squares depicted in art was the 4×4 square in an engraving entitled Melancholia I by Albrecht Dürer. Filled with numbers 1 through 16, the Dürer Square demonstrates the magic constant, 34 and the year of engraving, 1514, in the middle of the bottom row of the square.

This magic square on the pie is the same one as on the Passion façade of Antoni Gaudí’s Sagrada Família. It also has a religious meaning as ‘Jesus Crucifixion Age 33’.  Although it is not a true magic square because the grid contains the duplicate numbers of 10 and 14, it does consist of a magic constant–The number 33, with sums of rows, columns, diagonals, and 2 x 2 sub-squares all equal to 33. The reason why this person wanted to have this special pie is that it was customized for his girlfriend, whose name sounds like ‘33’ in Chinese.

Number theory is marked by astonishing connections between seemingly unrelated ideas. To understand how common prime numbers are, we translate the question into the entirely different language of complex analysis. To prove Fermat’s last theorem—a simple statement about the integers—we need to combine powerful tools in complex analysis as well as algebraic geometry. The Langlands program is a modern example of such an astonishing connection (which in fact generalizes many of the ideas in the proof of Fermat’s last theorem). One view of the Langlands program is that certain geometric spaces called Shimura varieties should have a description in terms of analytic objects called automorphic representations. In order to avoid too much technical detail, we can simply think of this as a deep connection between two different worlds: the geometric world and the spectral world (which is our name for the world of analysis, the word “spectral” distantly related to the “spectrum” of light). In the artwork, we see two very different and very separate worlds—our spectral and geometric worlds. Decades of work by many people has led to the development of a fruitful approach to establishing this connection, known as the Langlands-Kottwitz method. A prime example is the Kottwitz paper (1992). This method relies on an extremely complicated machine called the trace formula. The trace formula is an equation that straddles the divide: the two sides of this equation are called the spectral side and the geometric side, and they express the same information in the languages of these two different worlds. In the artwork, we see our two worlds are connected by a tremendous and complicated machine—the trace formula, which itself has a spectral side and geometric side. To get information from one world to the other, we first have to establish a connection between the geometric world and the geometric side of the trace formula; then the trace formula can be used to transfer this information to its spectral side, and finally the spectral side of the trace formula is connected to the spectral world.

My own research is concerned largely with the first step in this process, describing geometric spaces in a way the geometric side of the trace formula can understand—laying cables from the geometric world to the geometric side of the trace formula. This process is often referred to as “point-counting”, because the main step is to get a good description of all the points of our space. The papers Kisin (2017) and Shin (2009) carry out this process for certain classes of geometric spaces, and my work in progress combines the ideas from these papers to handle a new class of spaces—building on the infrastructure they have established to expand the network of connections ever wider. 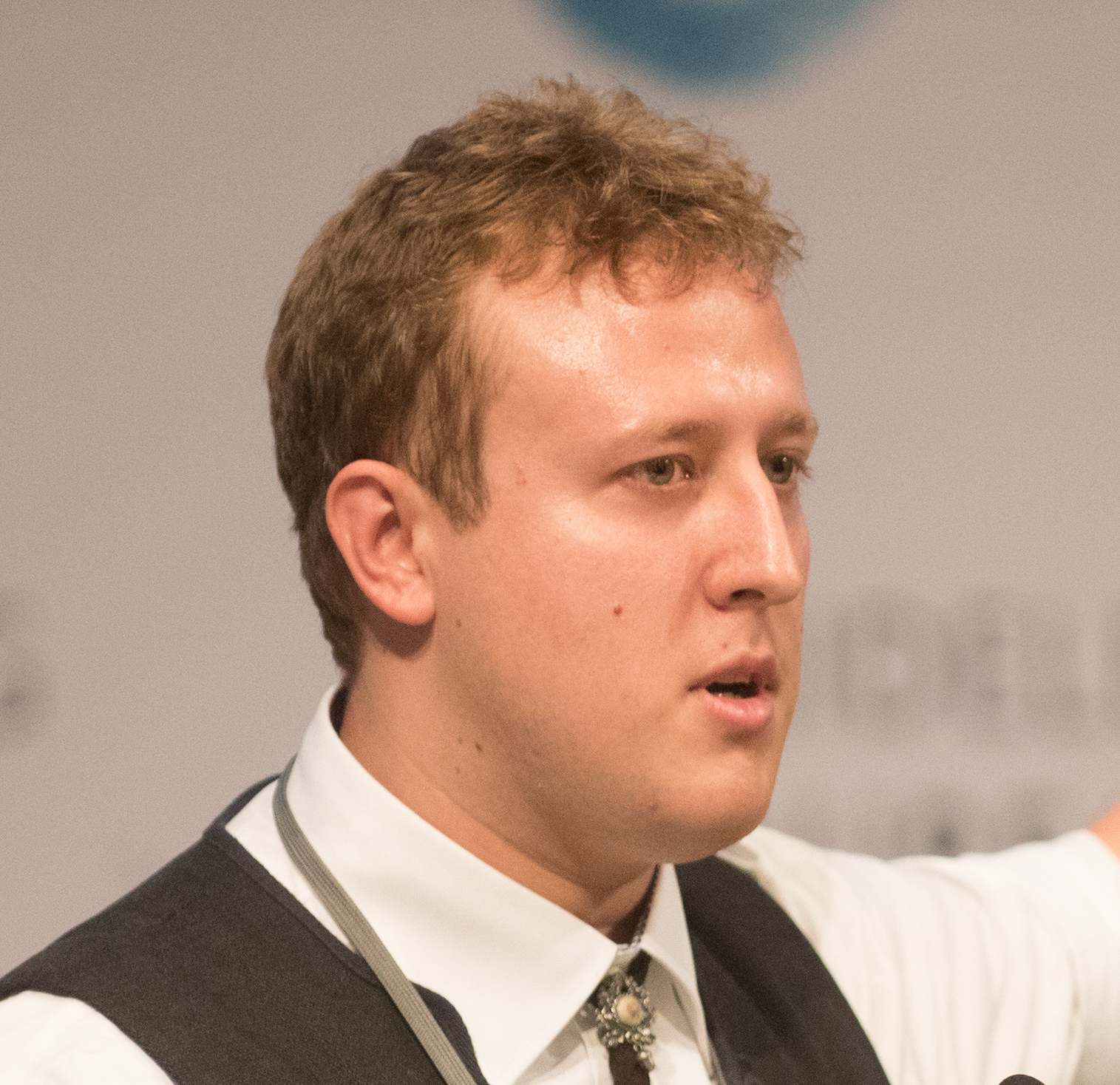