Social media platforms like Twitter have been under the spotlight recently, and have (reasonably) been accused of being a place where negative voices can gain a lot of influence. While this is definitely a fair comment, there is a good side to it as well – I’m a regular user of Twitter, and I find that my carefully curated ‘Twitter bubble’ of friends and various mathematical accounts I follow is a great source of interesting mathematical ideas and content.

Recently I spotted a tweet from the department of mathematics at UCL – a screenshot is below, with a link to the post – sharing this lovely curiosity of mathematical history – a number system developed and used by Cistercian monks in the 13th century. 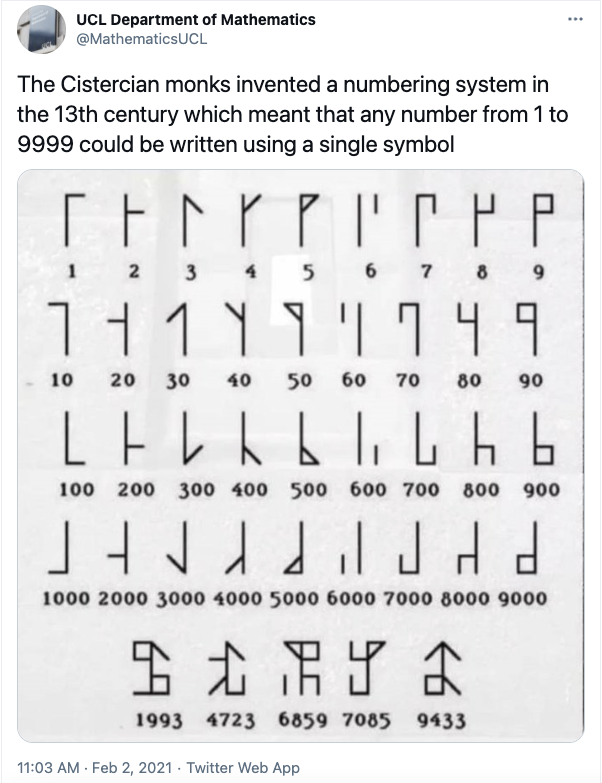 The number system can represent any number up to four digits using a single symbol – it involves a central vertical line with four decorations added to the top right, top left, bottom right and bottom left representing the units, tens, hundreds and thousands respectively. Using the chart above you can hopefully work out roughly how it goes.

The fact that this system uses different areas of the symbol to encode different decimal digits is actually quite impressive – it emerged in Europe around the same time that a place-value number system started being used more widely, and prior to this most numbering used Roman numerals. These work in a completely different way – you read across the number and add up the symbols, and different letters are used for 1, 10, 100 and 1000 so you can tell them apart. There are lots of fiddly rules to remember, like not having more than three I’s together, and if a small number comes before a larger one it’s subtracted instead of added.

The new system sweeping the continent at around that time was Arabic numerals – a place value system that splits the digits into columns (so their place within the number told you their value), and introduces the revolutionary and now necessary idea of a symbol for zero. Of course, Roman numerals weren’t the only number system in use in the ancient world: the Ancient Babylonians used a base-60 system with cuneiform symbols, repeating the symbols for 1 and 10 the requisite number of times until you reach 60, then starting again but with an extra tally nearby to count the number of 60s. 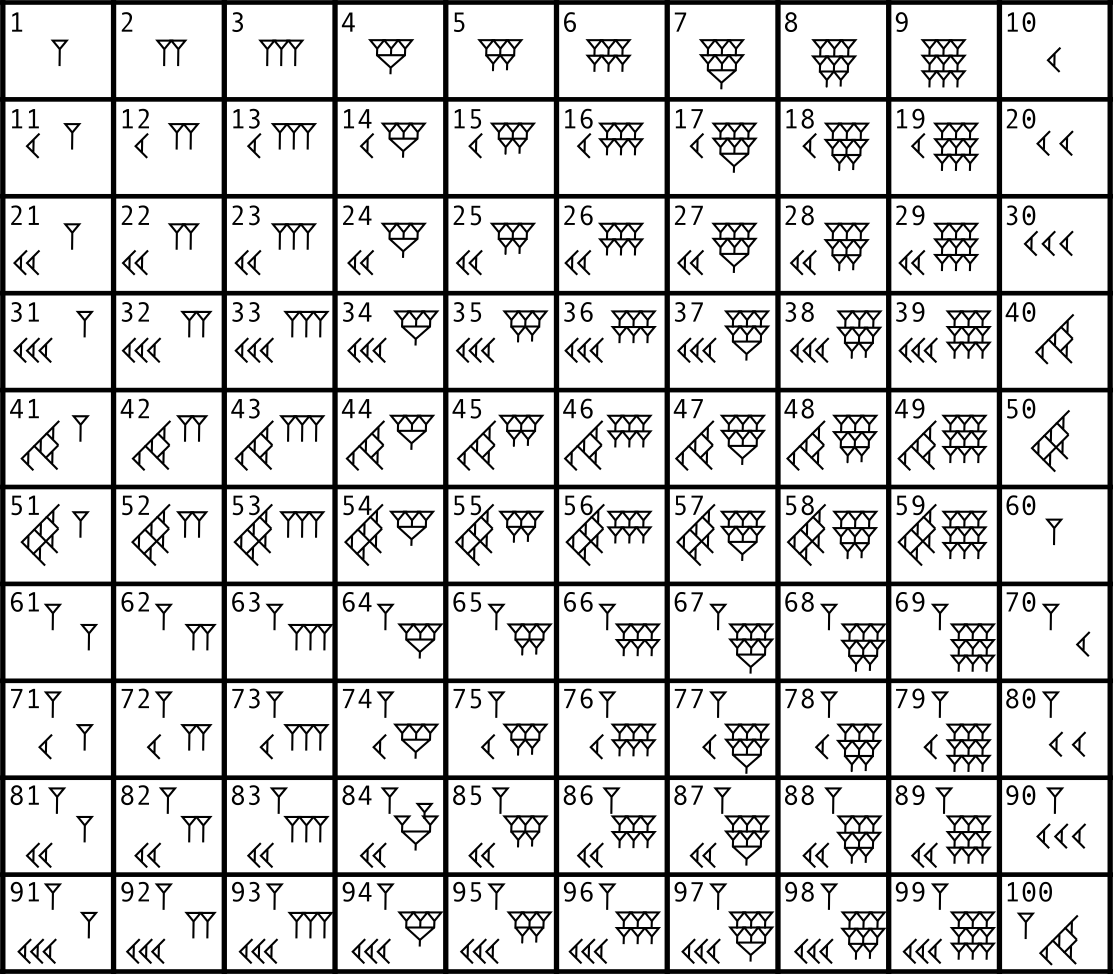 Other ancient number systems used similar tallies, like the Egyptian numbers which used a line (staff) for one and a loop (heel) for ten, or the Mayan base 20 numbering system with a dot for one, a horizontal line for 5, and a separate row for each power of 20. Today though, the main system used internationally is base-10 Arabic numerals.

One big benefit of the ‘ones, tens, hundreds, thousands’ structure is that it allows for easy addition and multiplication column by column, and makes it easy to compare the size of two numbers. While the Cistercian system still separates numbers out into digits, it’s not quite as easy to perform arithmetic on. It was mainly used for non-mathematical numberings like annotating page numbers and recording dates, and apparently outlived its use by the monks – it was adopted by wine-makers as late as the 18th century to carve the year of vintage into wine barrels as an easy shorthand.

Having seen this nice fact and amused myself briefly by trying to write some numbers using this system, I was pleased that something I hadn’t heard of before had been brought to my attention by Twitter. But then I started looking down the thread and realised that in response to this message, people had responded with their own thoughts, reactions and tributes, creating an enjoyable appendix to this lovely mathematical fact.

Some were discussing how pleasing the system is – for instance, combining a 1 and a 4 makes a 5, and combining 2 and 6 makes 8 – in a way that’s nice and logical. Some were cynical about how it’s just the normal decimal system but written in a different way – you could just write four numbers attached to a stick in the four corners and get ‘one symbol’ – while others praised its simple elegance, compactness and suitability for carving.

Others took the concept as inspiration – within a couple of days of the original post, someone had generated all 10,000 symbols and put them into an image (which would make a cool poster!); another person had made a video counting up through the numbers (described, correctly, as ‘trippy’), and another made a website that allows you to type in a number and get the Cistercian representation. One person has even created a font that compresses groups of up to four typed digits into their symbolic representation.

One person sketched out a way to extend the numbering systems beyond 10,000, by rotating the central stick to one of four possible orientations, allowing you to denote numbers into the millions, while another surmises that by orienting the stick horizontally and assigning powers of 10 to positions spaced regularly along it, above and below, you could extend it theoretically to as big a number as you want.

My favourite comment was from one person who used it to leave their phone number – accessible only to people cool enough to know how to read it. In fact, all the responses were fun to read – people sharing their enthusiasm, things it reminded them of and which of their own projects they’re planning to incorporate it into, whether it’s maths, coding or even art – generally, just people enjoying an interesting thing and taking pleasure in learning something new.

This is really one of the strengths of social media, and I suppose what its creators originally intended it to be – a way to share things with lots of other people and enjoy them together. The nice thing about mathematics is that there are so many connections, and ways to adapt and combine things, that it can be worthwhile sharing something just to see what the internet will make of it.