We had a workshop on “Cortical Spreading Depression (CSD) and Related Neurological Phenomena” at the Fields Institute in Toronto, Canada. All talks are available online here. CSD is a phenomemon that links neuronal activity in the brain during migraine with aura to stroke and epilepsy. The common factor is disturbed ion homeostasis in the cortex.

The Fields Institute in Toronto is an international centre for research in mathematical sciences, which may sound surprising as this workshop is seemingly about neurology. In fact, we had and needed a good mixture of people from neurology, physiology, neurosurgery, neural control engineering, psychology, theoretical physics, and mathematics to fully cover CSD in 19 talks and 4 open discussions. 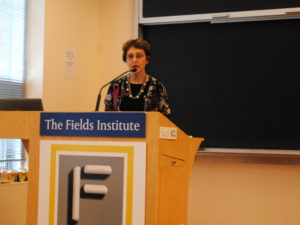 Dr. Grafstein talks about the early days of CSD and the particular people who are important in this field. From Aristides Leão, who discovered CSD, to Albert M. Grass, who built and improved multi-channel electroencephalographs (EEG), to Benedict Burns, her supervisor, to Alan Lloyd Hodgkin, who provided the first mathematical model, to Eric Kandel, who had to do CSD research as a “penalty” before he was allowed to perform his research, and to many, many more …

Of course, I also like to highlight the three talks from my own group, which are linked below.

Nucleation and front and pulse propagation